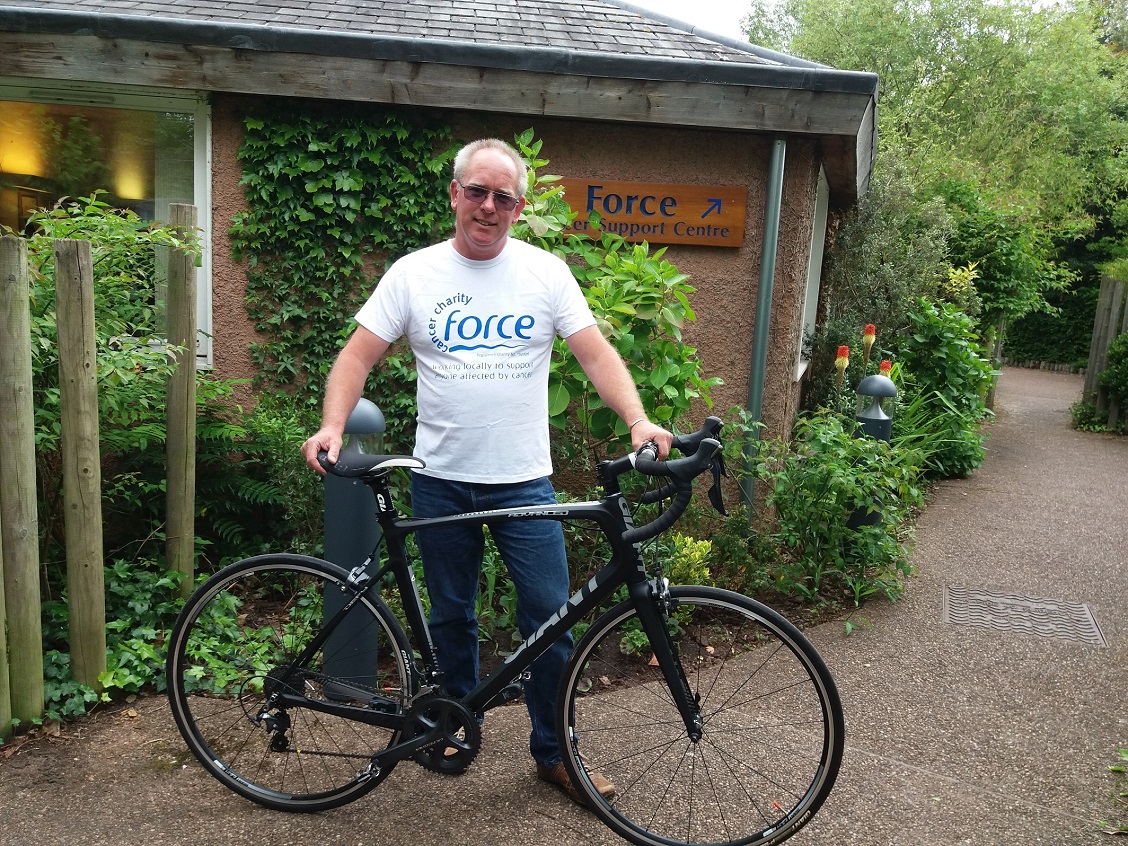 Heartless thieves have stolen a Crediton man’s bicycle from outside his home just weeks before he is due to take part in a charity ride.

But his preparations were thrown into disarray when his van was broken into and his precious bike stolen along with many of the tools he uses for his job in building and ground works. He lost around £3,000 worth of gear in total.

Self-employed Alistair is remarkably philosophical: “No-one was hurt and they didn’t have to mug an old lady to get what they wanted.

“I will not let this detract from my goal of raising money for FORCE.”

When friends heard of his plight, he was inundated with offers to loan him a bike but he decided it was better to buy a new one so splashed out £1,500 to get his training programme back on track.

Two reasons prompted Alistair to enter The Nello for the first time in 2019  he wanted to mark his 50th birthday with a personal challenge and support FORCE into the bargain.

“This has always been a charity very close to my heart and after my fiancée (Emma Mills) was diagnosed with malignant melanoma in 2017 it became even more important to me,” he said.

“The care and support that she received from FORCE was amazing and I want to do everything I can to ensure FORCE continues to provide its vital services for as many people as possible in the future.”

Alistair is clearly a man who doesn’t do things by halves. The Nello is the second part of a sporting trial to celebrate his birthday.

Forty-eight hours earlier he will take part in the Yorkshire Three Peaks Challenge, attempting to complete a 24-mile trek with 5,200ft of ascent in under 12 hours.

He’ll take on the peaks of Pen-y-ghent, Whernside and Ingleborough, which form part of the Pennine range and encircle the head of the River Ribble valley in the Yorkshire Dales National Park.

“I wanted to do something a bit different to raise money,” said Alistair. “This is a monumental challenge for me but any support you can give to this truly life changing charity will be well worth my pain.”

He has set himself a target of £1,000 and has set up an online fundraising page: http://uk.virginmoneygiving.com/AlistairKidd

Alistair is hoping his efforts can help this year’s 20th Nello ride, dubbed Il Ventesimo (The Twentieth) in honour of its Italian roots, reach its fundraising target of a record £100,000.

That would take the overall total raised for FORCE from the ride past the magic £1million mark.

He’s looking forward to experiencing the fantastic atmosphere The Nello is known for from the saddle this year after helping out as a volunteer last year.

He’ll also be stage manager at the Classics Galore! concert in aid of FORCE at the University of Exeter Great Hall on November 9 when Emma will be performing with the St David’s Players or as a member of the orchestra.