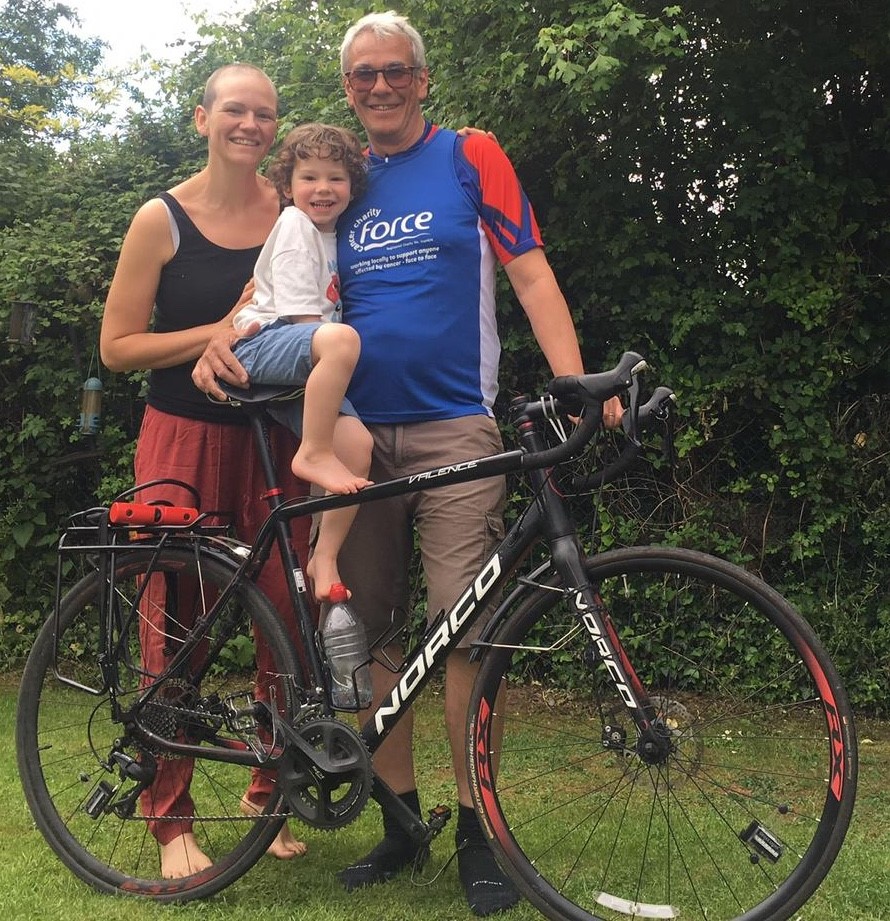 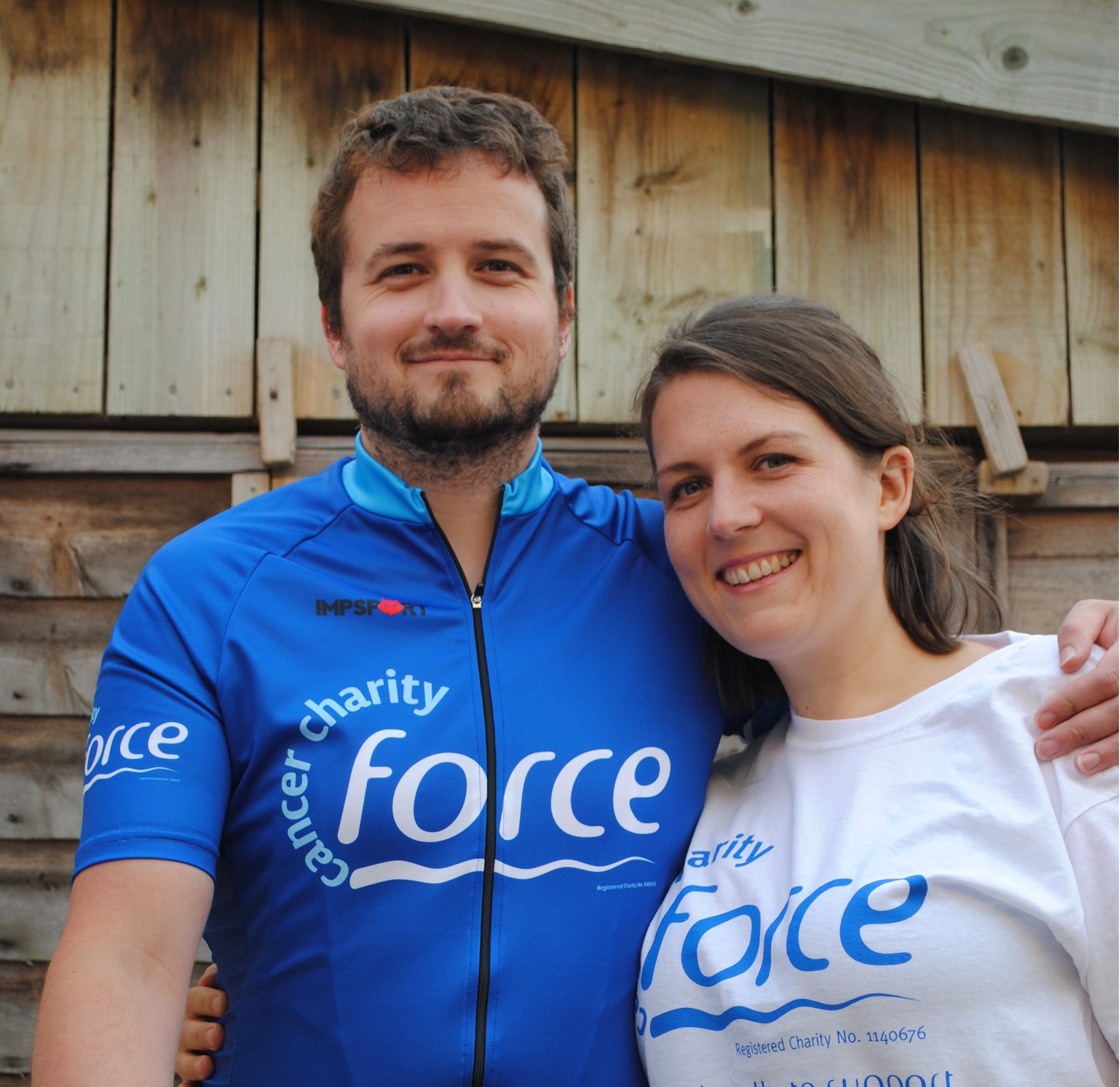 Two cyclists who will be raising money for FORCE Cancer Charity when they join more than 100,000 people taking part in this weekend’s RideLondon event have shared their stories.

Nick Guttmann from London and Stephen Luke from Woodbury will be tackling the 100 mile challenge on Sunday (August 4).

Each of them has a special and intensely personal reason for choosing FORCE, which supports anyone locally affected by cancer.

Nick’s daughter Nellie and Stephen’s wife Catherine turned to our charity along with their families after a diagnosis of breast cancer rocked their lives.

“At the end of August 2018 the future was looking bright,” explains Nick. “Our daughter Nellie had a new job, home and boyfriend (Geoff) in Exeter. My wife Sally and I were coming to the end of a wonderful two and a half years living in rural Somerset and were looking forward to returning to London. 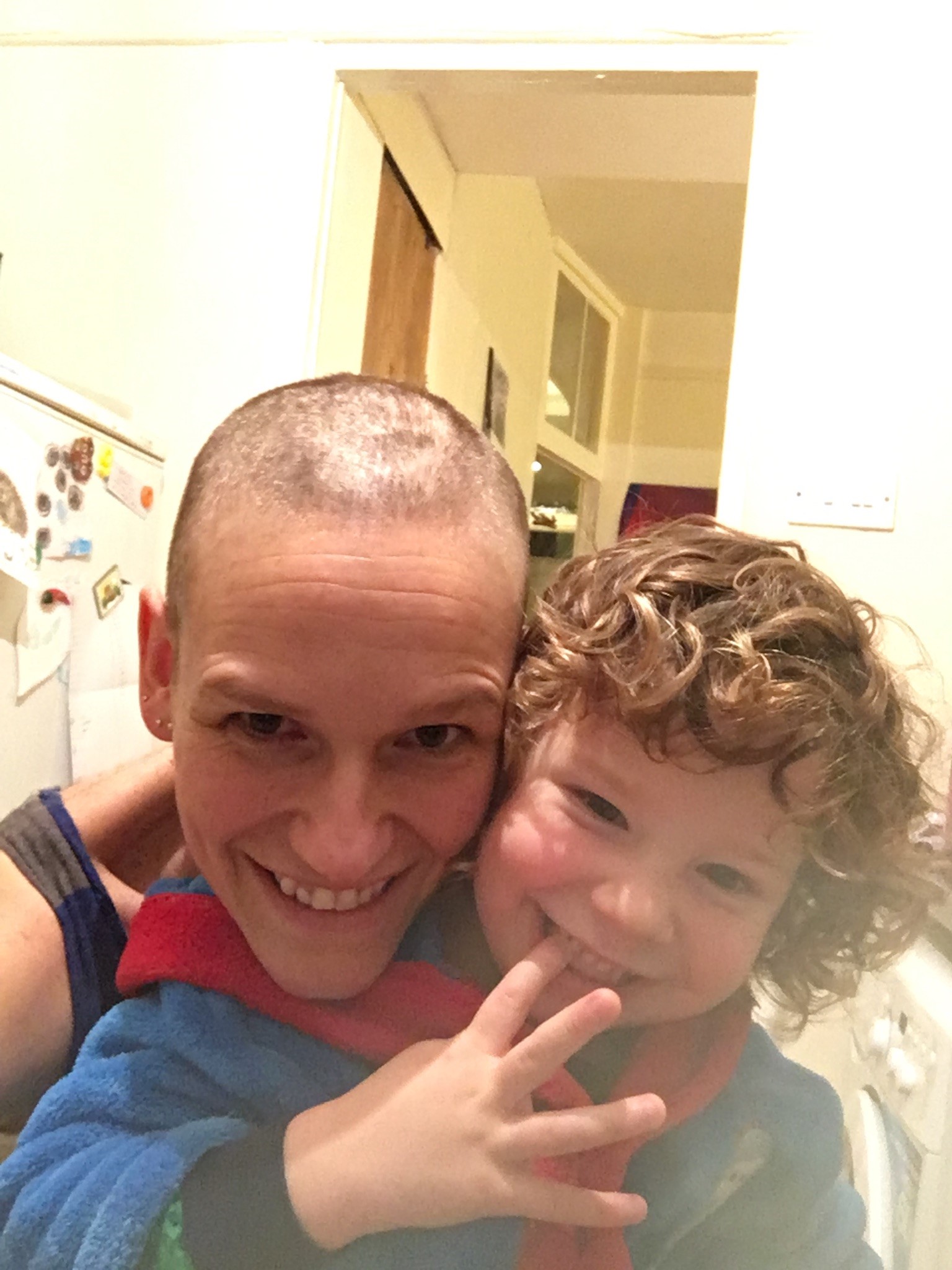 “Then on September 3rd, Nellie’s 35th birthday, she felt a lump in her breast.

It was breast cancer.

“Nine months, one mastectomy, 13 cycles of chemotherapy (should have been 15 but her body said no more after 13) and 15 sessions of radiotherapy later, Nellie has finally come to the end of active treatment and we are all once again looking to the future, hopeful that this dreadful period is behind us.”

Nellie’s cancer diagnosis came at a time when she was feeling fitter and healthier than she had in a long while. She had also met “a really special man” just four weeks before.

Her parents had moved to the Westcountry when she was pregnant. With their grandson a toddler and life for Nellie looking so good, they were packed and ready to leave within days.

Then came the shattering news.

The family describe the support they received from FORCE during their ordeal as enormous, despite the fact that the first time Nellie and Sally walked into the Support Centre, they had to walk straight out again.

“It seemed like the confirmation that she had breast cancer. We were all in denial and couldn’t believe what was happening,” admits Nick, Head of the Humanitarian Division at Christian Aid. 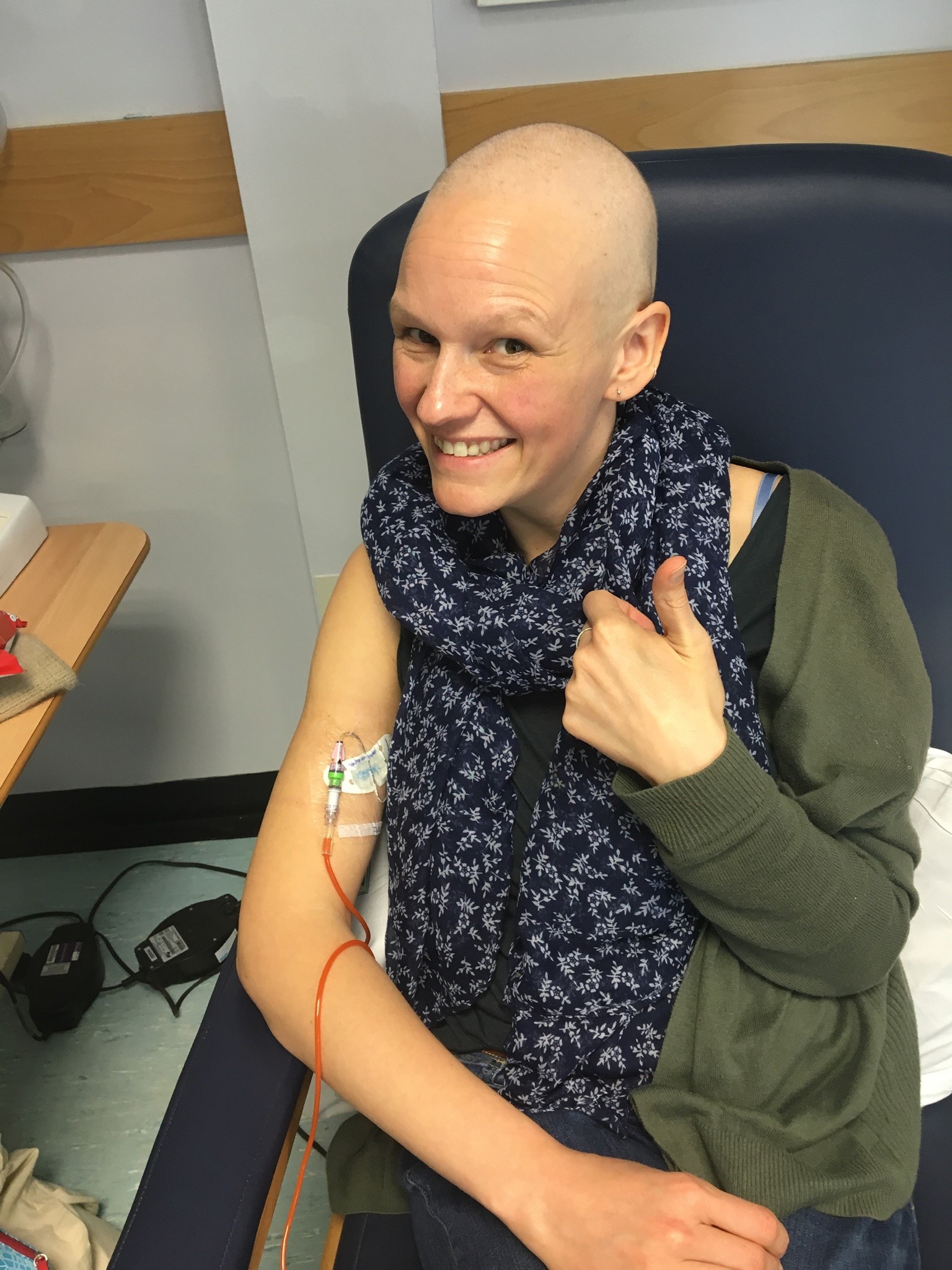 “But FORCE understood how hard it was and were quietly there to help.

“Nellie returned and sought help in understanding her diagnosis and treatment.

“Specialist nurses talked her through what might happen and the support they could offer that could help with the emotional and physical impact of both treatment and having a cancer diagnosis.”

Nellie also had one-to-one counselling that helped her navigate her own emotions and provided advice about how to support her son Roy through it all.

“I was a single parent with a little boy of two,” said Nellie, a communications manager for the NHS Devon Clinical Commissioning Group at County Hall in Exeter.

“I wanted to protect him but keep him involved at the same time. We got him involved in shaving my hair when it all started falling out, but I wanted to know how to explain things as well, especially when I was going through chemo, without scaring him.”

Her FORCE support specialist Paul suggested a calendar for Roy so he could understand when she would be knocked out by treatment and who would be around to look after them both.

“It was very simple but really helped Roy understand that on some days his mummy wouldn’t be her normal, cheerful self, but that she would be okay again,” Nick explained.

Nellie has been remarkably open and honest about so many of the ways cancer has impacted her life and how FORCE has been there to help.

“Coming to terms with not being able to have any more children has been very hard, but Paul has helped me come to terms with that too,” she said.

“When your world feels like it’s falling apart and you can’t make sense of anything, FORCE has been there to catch me and my family.

“There have been times when I haven’t known what to do or where to turn and I’ve found myself at FORCE. There has always been someone there to help, to talk me through things, to take away the massive anxiety and terror, to make me feel safe again.”

“We are all thrilled that Nellie has come to the end of active treatment, although this can be a daunting place for people,” said Nick.

“What happens when the medical teams step back and you are left to fend for yourself? Possibly one of the best things about FORCE is that the support they provide keeps going once treatment has finished.

“Nellie will still see her support specialist to help her with the long term impact of hormone treatment. 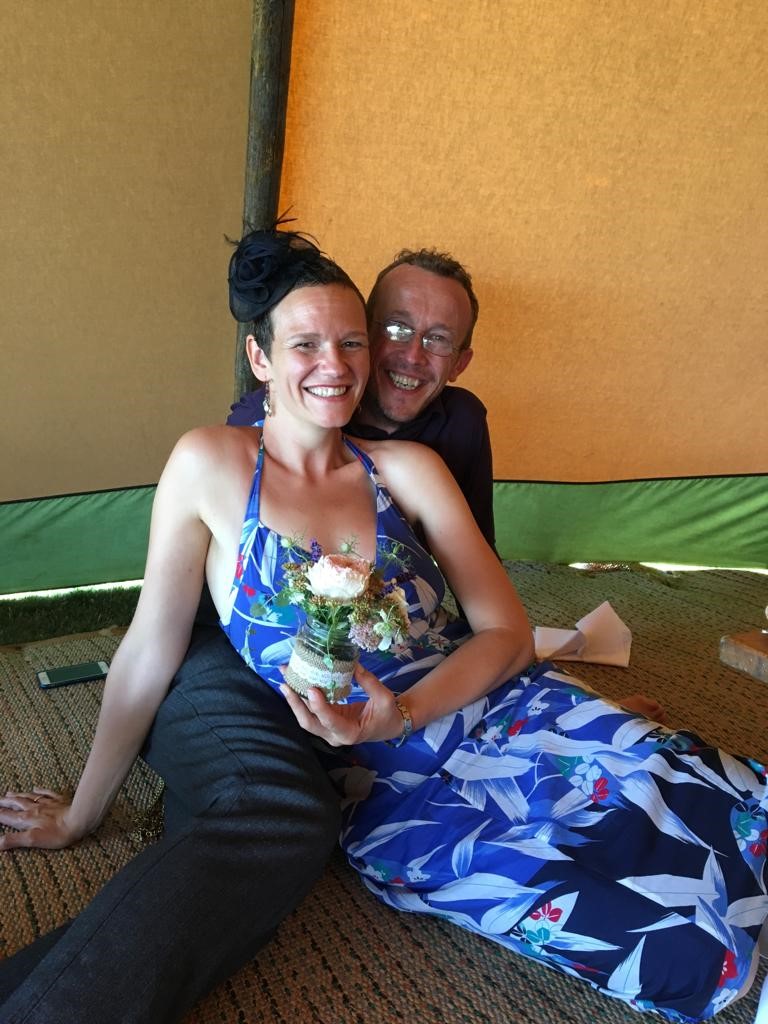 “She’s currently attending a yoga course specifically aimed at cancer rehab, she’s seen a specialist physio, who has helped put together a graded exercise programme to help build her strength again and in September she’ll be attending their Moving Forward course to build a life again after cancer.

“It’s not just Nellie they have supported. FORCE has given Sally and me invaluable information on everything, helping us to understand the treatment, its impact and the types of support needed to help Nellie through.”

“It’s a brilliant service that has made all the difference in helping us all cope and find our way through this terrible illness.”

Nellie is now starting a slow return to work and she and Geoff have moved in together. Nellie, Geoff and Roy will all be in London to support her dad on August 4, proudly wearing their FORCE T-shirts.

Nick is an experienced cyclist and has set himself a target of raising £5,000 from his RideLondon efforts. He is well on his way to reaching it via his online sponsorship page  https://uk.virginmoneygiving.com/NickGuttmann

Stephen Luke is taking on the challenge of RideLondon 100 for the second year running.

His motivation remains the same.

He rode last year for Breast Cancer Now with a charity entry but has a ballot place this year so is free to raise money for any cause. FORCE was the automatic choice.

“I am pleased to be riding for FORCE this year as they provided a great deal of support to my wife, Catherine, throughout her treatment and beyond when she went through breast cancer a couple of years ago,” said Stephen.

Catherine was diagnosed in early December 2016 at the age of 31. 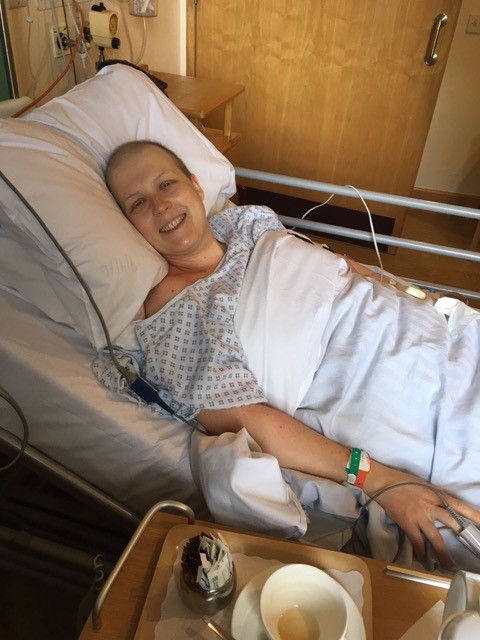 Amidst the whirlwind of hospital appointments for scans, plans for surgery, chemotherapy and radiotherapy and her treatment, she also had the couple’s two daughters to take care of.

She and Stephen had to explain to their three-year-old that mummy would be taking a funny medicine that would make her hair fall out while their baby had even more basic needs.

“Our younger daughter was just five months old and I had to stop breast feeding within a week,” said Catherine.

“She refused to take a bottle and Steve had to take her to the Yeovil Hospital walk in centre on Christmas Eve and Boxing Day for an ear infection and the beginnings of dehydration.”

Catherine herself was admitted at New Year when she developed an infection after her first round of chemo and later in 2017, nearly missed their daughter’s first birthday party with post surgery complications.

“I did make it (just), having been discharged from hospital that afternoon,” she said.

At a time of such enormous upheaval and stress, FORCE provided sanctuary and support.

She used the Support Centre for wig fitting, one-to-one and group support, spoke to FORCE information nurses when the inevitable questions about her treatment arose, enjoyed a Look Good, Feel Better make-up and skin care session, joined the Moving Forward group or simply dropped in for a cuppa and some respite between appointments.

“I was incredibly anxious,” admits Catherine. “And I was angry, very angry, for my children because it felt like someone was trying take their mother away.

“I finished treatment in August 2017 but I kept going to support groups as a kind of top-up. It was about a year before I decided I was ready to move on.”

Moving on meant resuming her freelance career in singing and beginning a new venture teaching. She works as a part-time maths tutor  she has a PhD in mathematics  and semi-professional soprano.

Stephen, a physicist and application engineer for a global technology company, is a keen cyclist and commutes to work in Exeter on his bike when he can.

Catherine doesn’t have quite the same passion for pedalling but was able to join him on FORCE’s Autumn Series ride in 2018. 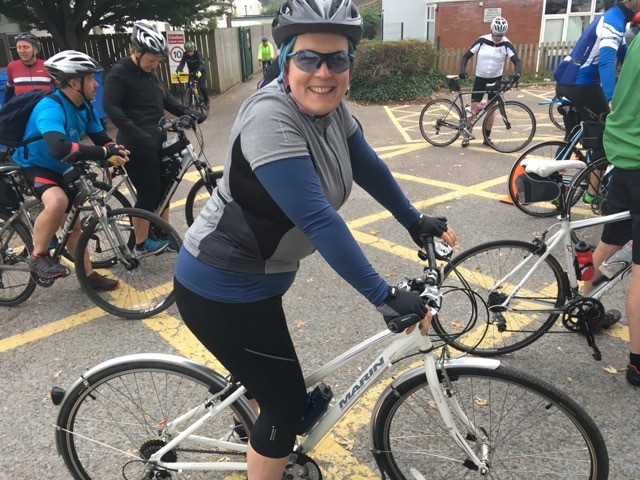 Stephen is keen to do what he can to repay FORCE for the support his wife and family have received.

“Having already received many generous donations from friends and family last year it may be harder for me to raise a lot this time around,” he said.

“It costs £1.7 million per year for FORCE to provide its incredible services, and every penny comes from fundraising and donations. Please help me to contribute to the fantastic work of this local charity.”

You can do that at https://uk.virginmoneygiving.com/stephenluke

Simon Bowen from Crediton and Rebecca Lee from Exeter are also taking part in Ride London for FORCE.

Rebecca, a specialist physiotherapist based in Tiverton, is supporting the charity in recognition of the “fantastic care” her mum received from FORCE.

“I will ever be encouraged by the strength, dignity and courage of my dear mum and also my uncle and my lovely friend John, who are all now at peace,” she said.

Prudential RideLondon is described as the world’s largest and greatest festival of cycling. Staged for the first time in August 2013, it attracts more than 100,000 riders who will this year cycle more than three million miles in six different events over the weekend of August 3-4.

It combines the fun of a free family ride in central London with the excitement of watching the world’s best professional cyclists. Amateur cyclists get involved by riding a 100-mile, 46-mile or a 19-mile challenge, all on the same closed roads as the professional road race, raising millions for good causes.

There is something for all ages and abilities on traffic-free roads around some of the capital’s most iconic landmarks.

The 100-mile event that the FORCE rides are undertaking attracts around 25,000 amateur cyclists for challenge like no other through London and Surrey on a similar route to that of the London 2012 Olympic road races. It starts in Queen Elizabeth Olympic Park, goes out through London to Surrey’s stunning country roads and hills before returning to the capital to finish in spectacular style on The Mall in front of Buckingham Palace.