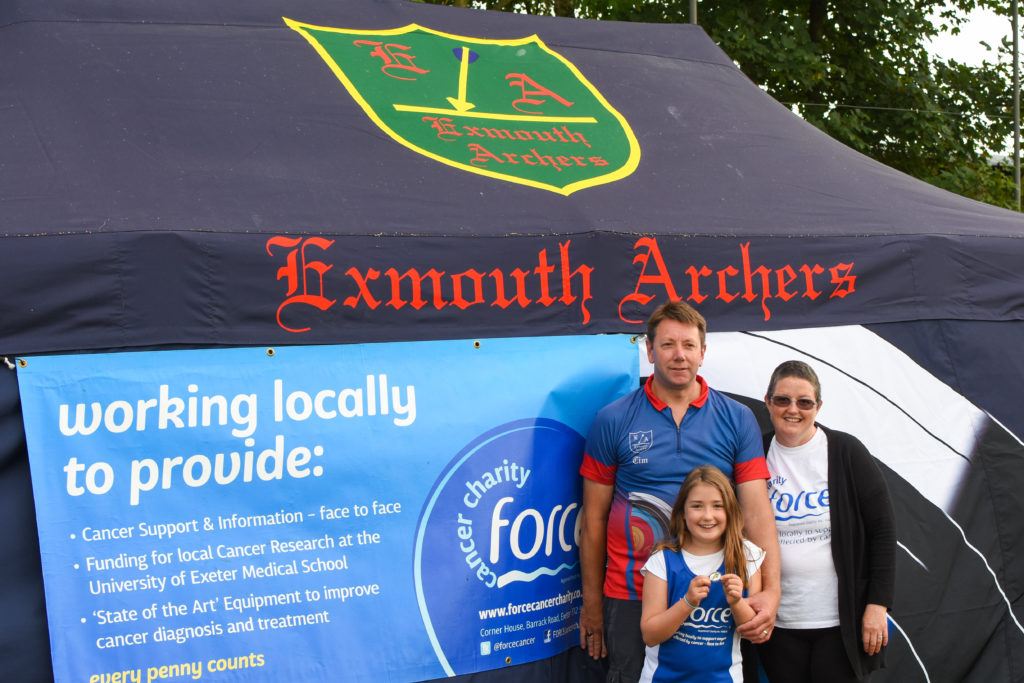 An Exmouth schoolgirl has used her archery skills to raise more than £1,800 for FORCE Cancer Charity, which supports her family.

At first she wanted to give the charity all the Christmas gift money she had received.

Then she hit on the idea of a sponsored shoot.

She took part in a competition organised by Exmouth Archers, where dad Tim is chairman.

The Beacon School pupil shot 144 arrows over four distances – 10, 15, 20 and 30 metres – in the barebow junior under 12 ladies section at the championships.

Holly won the competition with a score of 514 from her 144 shots, then with a cheeky smile admitted that she was the only archer in her category!

“The main thing I like about archery is spending time with my daddy. He is really good at it and he helps me,” said Holly, who took up the sport January 2020.

It was a long day for Holly – seven hours of competition and 156 arrows, including practice ones – and it was only the third time she had shot a full round over the longest distance. 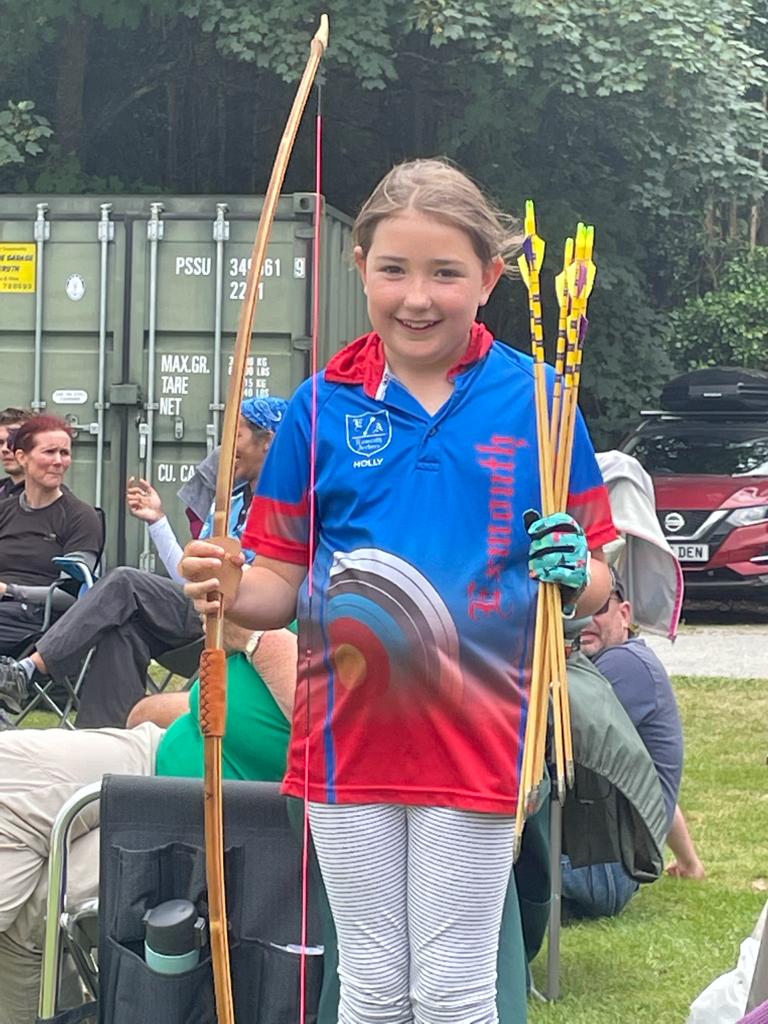 “I was pretty tired at the end of it,” she said. “But I like spending time with my archery friends and making new ones.”

Her friends, family and the generous people who attended the archery competition helped Holly far exceed her fundraising target.

“I wanted to give up my Christmas money to give to FORCE because of mummy having cancer but she gave me the idea of doing something sponsored,” said Holly, who is also a member of Littleham Brownies.

“My friend’s mum had cancer and she did a sponsored walk so I decided to do a sponsored shoot.

Mum Bridget, who was diagnosed with cancer in October, said: “We are extremely proud of Holly. She has done so well coping with it all emotionally.”

Bridget started chemotherapy in mid-November, had a mastectomy and reconstruction in March and started radiotherapy in June. She is also having antibody and hormone treatment.

“Holly coped really well when I was having chemo,” she said. “In the lead up to my operation she found it harder to cope.

“The biggest thing was that when I went into hospital was there were no visitors allowed due to COVID. Holly couldn’t come in and see what it looked like. I was in for four days. My nurse specialist, Sue Avery, arranged a video call so she could see where I’d be, ask questions and put a face to a name. It put Holly’s mind at rest.”

The family knew about FORCE because of the support Holly’s classmate and good friend Rosie and her mum Vicky Tarran received from the Exeter-based charity.

“Rosie helps me when I’m feeling worried and I try to help her. She is one of my best friends,” said Holly.

“Tim and I had a session with Paul (Grace, FORCE family specialist) and then Holly came in. It gave her reassurance,” said Bridget.

“FORCE has helped in lots of different ways,” said Holly. “I had counselling with Paul. He said I could come in my nurse’s uniform and take my toys. I came in with daddy.”

Bridget, a PA at Devon County Council who is involved with the Girl Guiding movement, said: “Thank you FORCE. To know that you are here and that we can turn to you for support and help. You do an amazing job. Please don’t stop.”

FORCE relies almost entirely on voluntary donations and fundraising by the communities it services. You can support Holly’s efforts via her online fundraising page –https://uk.virginmoneygiving.com/BridgetPratt

Holly uses a barebow, which has no added sights or stabilisers. She also has her own longbow but says: “I don’t use it much because I can’t pull the string back very well yet.”

She competed at this year’s national championships at Lilleshall, where she met GB Olympian Patrick Huston.

He offered youngsters the chance to put stickers on the bow he would use at the Tokyo Games. Holly managed to spot the one she attached as she watched Patrick and his team-mates reach the quarter-finals in the men’s team competition. 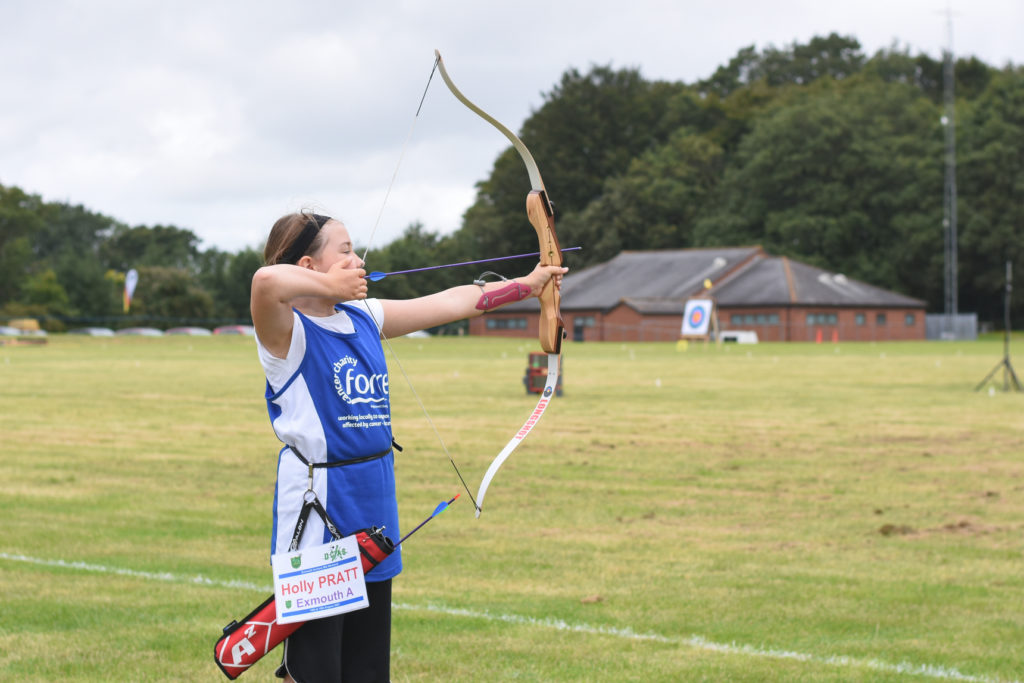