FORCE is set to benefit from the generosity of a local band who are about to launch their debut album.

For the past four years The Woodmen have been performing in pubs and busking in Devon, playing a range of music with folk, bluegrass and country Americana influences.

They play fast with lots of energy, vibrant rhythms and tight harmonies. One of their stand out cover songs is the folk song Wagon Wheel, co-written by Bob Dylan and Ketch Secor of the Old Crow Medicine Show.

Shobrooke Moon, The Woodmen‘s debut album, marks a celebration for the band.

In June 2017, one week after a gig in a barn, lead singer Pete Mason became ill and was diagnosed with lung cancer. Thanks to the Royal Devon and Exeter Hospital, Pete made a good recovery and is now having chemotherapy.

During his recovery period the band started recording some of Pete’s songs.

Pete said: “I was very honoured that the band felt that the songs were good enough and the project became a lifeline to help me come to terms with this difficult stage of my life.”

Shobrooke Moon is a collection of 14 original songs inspired by the Devon countryside with some amusing observations on village life. It also holds some powerful messages reflecting on the futility of the Iraq war and the importance of living each day to the full. 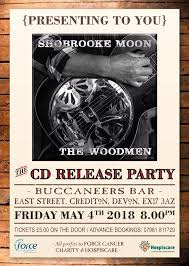 The album takes its name from a slow ballad that was inspired by the spectacular moons  in the night sky around the village but overall it’s a collection of fun, inspiring and hopeful songs plus the bonus track of the classic Wagon Wheel.

Alongside Pete Mason, the band consists of four experienced local musicians who bring their talent and skills to create a special sound – John Downes on guitar, banjo and vocals; Steve Ewart on bass and vocals; Leslie Hampson on drums, cajon, bodhran and vocals; and Stuart Toms, electric guitar, mandolin, and musical saw. They are also joined by a special guest violin player Joy Moore, who plays in the UK and Canada.

So many people have helped make the project work and it is a real community effort. The album was recorded and mixed by Duncan Chave at the Sound Gallery Studios in Exeter. The band then teamed up with Nick Halliwell from Occultation Recordings, who mastered the album. The impressive artwork was done by Chris Darvill.

The band have agreed that they wanted to do something to thank the NHS and local cancer charities and will give all profits from the sale of the album to FORCE and Hospiscare in Exeter.

Other charities gigs are planned throughout the year.

Pete said: “I hope that the songs will be enjoyed and inspire others, but most of all I want to thank the Woodmen Family collective for helping me achieve my dream.”

To buy a copy of the CD (priced £10) call 017981 811729, or send a message through Facebook @thewoodmenfamily. CD’s are also available from The Red Lion Inn in Shobrooke and from selected local shops in Crediton.