The Fez fundraising phenomenon continues to go from strength to strength and has now raised a staggering £55,000 for FORCE since the campaign was launched on May 28 2014.

The latest boost to the fund has come from the Devon Rugby Legends Tag Feztival with the organisers handing over a cheque for £12,200. 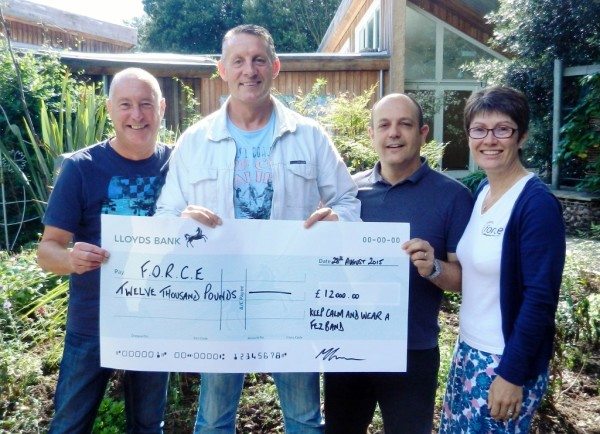 FORCE Head of Fundraising Sarah Daniels receives a cheque for £12,000 raised from the sale of fezbands from Martin Lynn, flanked by Barry Pollard (left) and Sean Partridge

Within the past month the Fez Army has also presented a cheque for £12,000 from the sale of fezbands  green wristbands now worn by thousands of people around Exeter and beyond  and a series of events around Fezmas Day over the August Bank Holiday weekend will bring in a further £9,000.

The man behind the Fez campaign is Martin Lynn. A cancer patient who credits FORCE with turning his life around, Martin is immensely proud of how successful he and his team have been.

“To think that when I walked into FORCE last May, armed with my Fez and my Keep Calm And Wear A Fez canvas, FORCE were hoping we would raise £1000 for them. The sum of money is staggering, it really is, but the awareness is equally (if not more important) and because of us – the laughter, the tears, the lunacy – we are putting FORCE at the front of people’s minds.”

A tribute from FORCE

FORCE Chief Executive Meriel Fishwick has paid tribute to Martin and his supporters.

“As the Fez phenomenon continues to storm Devon and other parts of the world, we are simply in awe of Fez fundraising,” she said. “In real terms, this means that we can potentially look at developing additional services and reach more people affected by cancer. We have a third outreach support project planned for East Devon, and would like to extend the services available in our existing projects in Tiverton and Okehampton.

“To the Fez Army we send huge thanks for the awareness they’ve created and the fun they’ve brought to so many. You can’t overstate the importance of the funds raised to a charity which relies on voluntary contributions.”

The tournament featured eight teams of veterans (over 35s) from around Devon and beyond. Plymouth Albion were overall champions, Exeter Chiefs won the Plate competition, Topsham were Shield winners and Crediton took the Bowl.

Date set for next year

Around 700 people enjoyed the day with money raised from sponsorship, team entry fees, catering, merchandise and an auction of sporting memorabilia.

“We are extremely proud of the efforts you TAG FEZZers went to in supporting our little event and making it such a success,” said Andy. “As we all know, FORCE has been the rock on which Darren, Lynny and their families have been able to stand strong against cancer. To be able to be involved in making any additional services available from FORCE to other parts of Devon and afford many others to benefit from the support that this charity provides makes us feel warm inside, as it should you!”

Darren added: “I couldn’t be more proud. It’s been very emotional to contemplate what has happened and what we have achieved and the awareness we have generated. Credit to the rugby community for getting behind the event and to everyone who supported us.” 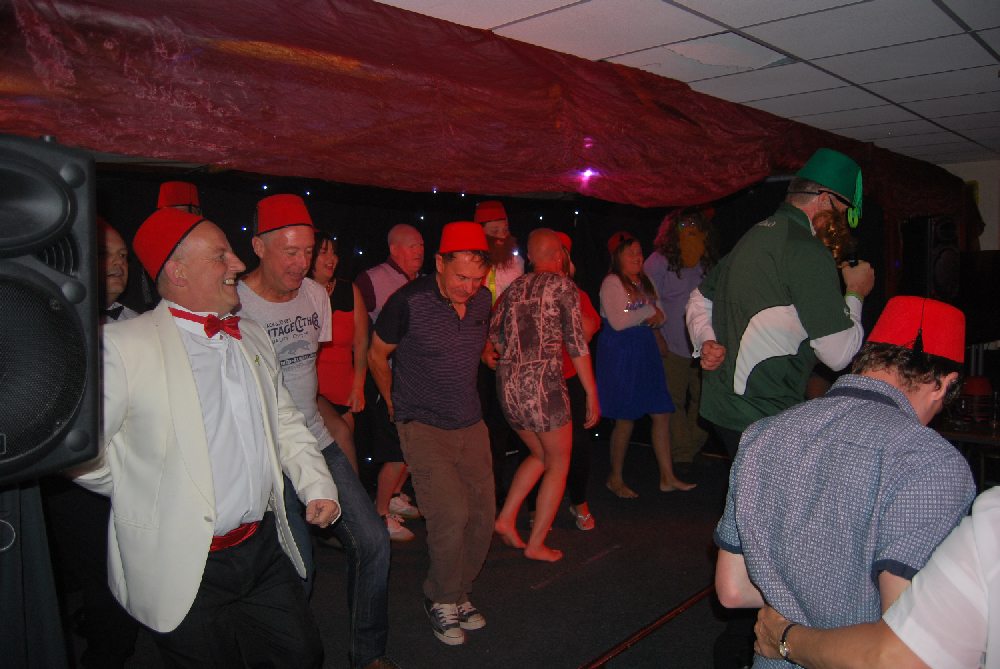 It involved a hugely entertaining line-up of acts and a finale that involved Ted Durkin  Martin Lynn’s bearded and bespectacled alter ego  leading the audience in a performance of Riverdance.

“Thank you to everyone who attended this year’s show,” said Dave. “Thank you for laughing, crying, singing, dancing and filling the St Thomas Social Club with such emotion you could cut it with a knife! At points we were speechless as to the depth and power of the feelings we had provoked, no one was embarrassed by their own passion or regretted showing publicly their sentimental side and a tear running down someone’s cheek was a powerful sight and confirmed to us that we we’re once again doing something right!”

Fezmas Day itself saw friends and families gathering to share all the fun of Christmas without the pressure and presents.

And the weekend concluded with a successful barbecue at the Royal Oak in Okehampton Street.