FORCE Cancer Charity will have 144 people running for them in Sunday’s Great West Run.

FORCE is one of the event’s partner charities and is hoping to raise £30,000 from this year’s race.

Oly Watts, FORCE Fundraising Development Officer said: “The Exeter Great West Run is a fabulous event to get behind and support. The run gives for our supporters an opportunity to give something back to FORCE whilst taking on this amazing challenge. Many of whom are taking part for the very first time.”

The reasons why people have chosen to join Team FORCE in 2017 have touched staff and volunteers at the charity, which supports anyone locally affected by cancer.

Husband and wife Mark and Catherine Myer (pictured above) from Exmouth have benefitted from that support.

“I wanted to say thank you for all the help you have given me and my family this year as I received treatment for recurrent breast cancer,” said Catherine. “The support was holistic and made me feel so cared for by such professional people. As an ex oncology nurse, I couldn’t have wished for a safer haven.”

Mark added: “I wanted to give something back to the wonderful people who supported my wife and our family through her treatment for cancer earlier this year and to make sure others can benefit from the same support.”

Another runner said: “Our family has been touched by cancer and FORCE have been fantastic with support and care.” 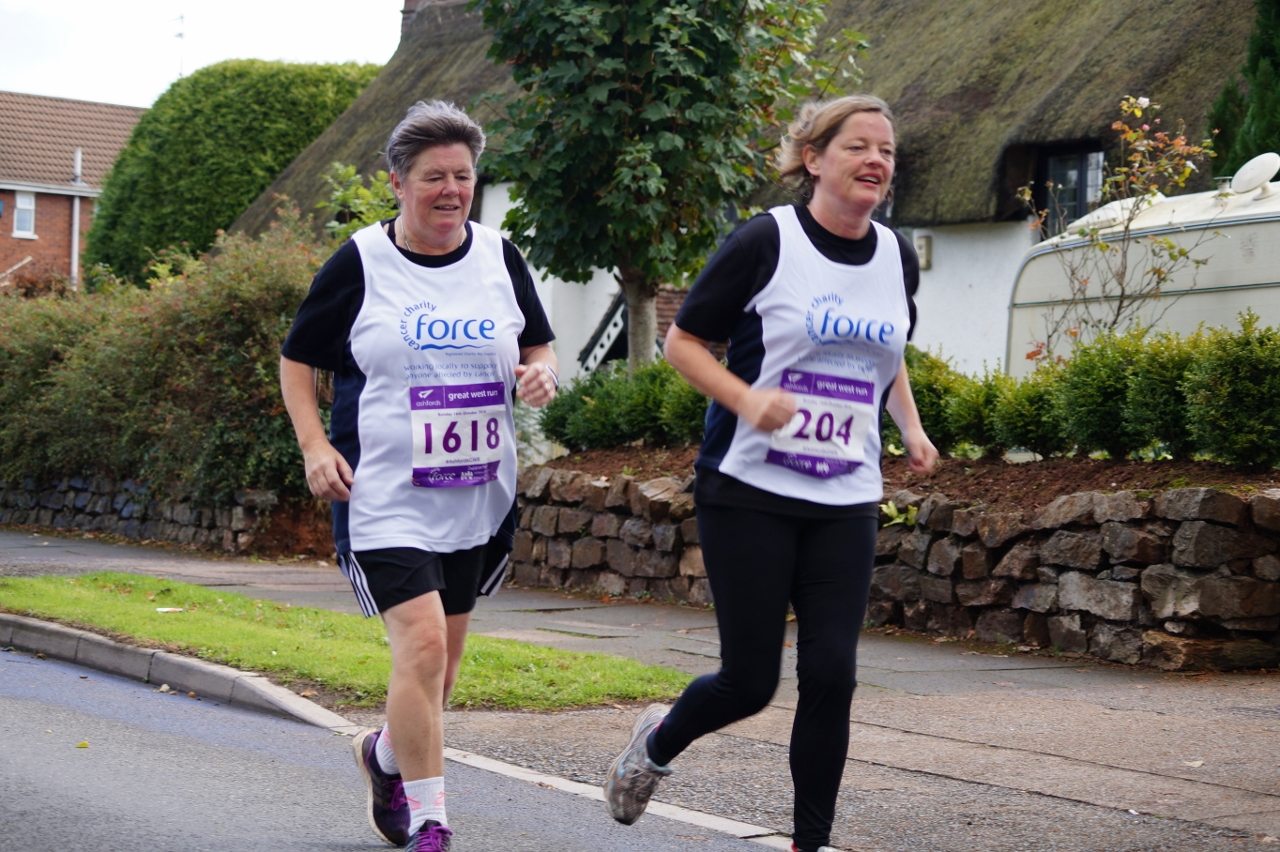 Mary, who works for a large national charity, will be on the start line again this Sunday

“We ran for FORCE because we know many people who have been helped by them at a time when they really needed support and understanding as they either faced a cancer diagnosis or were caring for someone who was ill and needed some carer support,” she said.

“We know from what they have told us what a massive difference FORCE has made to them and we want to play our part in making sure that FORCE goes from strength to strength,” she added

Mary and estate agent Emma, who is unable to run this year, were determined that they would finish the run together and crossed the finishing line last and second last but bursting with pride that they had completed it at all.

“We were encouraged at every step by an enthusiastic crowd which made a huge difference,” said Mary, who decided to enter just nine weeks before the event, having never run before and just turned 60.

She recalls: “The highlight was the samba band on the University campus, encouraging us with their infectiously upbeat music as we struggled up a seemingly endless hill! Crossing the finishing line felt incredible.

“The day was amazing and the support we received from everyone at FORCE was awesome.

“The very best thing about completing the run was seeing that we raised around £1,200 in sponsorship, largely because many of our generous sponsors had also used FORCE or knew someone who had.”

It’s hard not to be moved by Helen Parminter’s story. Her partner, Jay Taylor, has terminal brain cancer and the Exeter family  daughter Olivia is five  doesn’t know how long he has left to live.

His #DaddyDaughterLove campaign has captured the hearts of thousands. 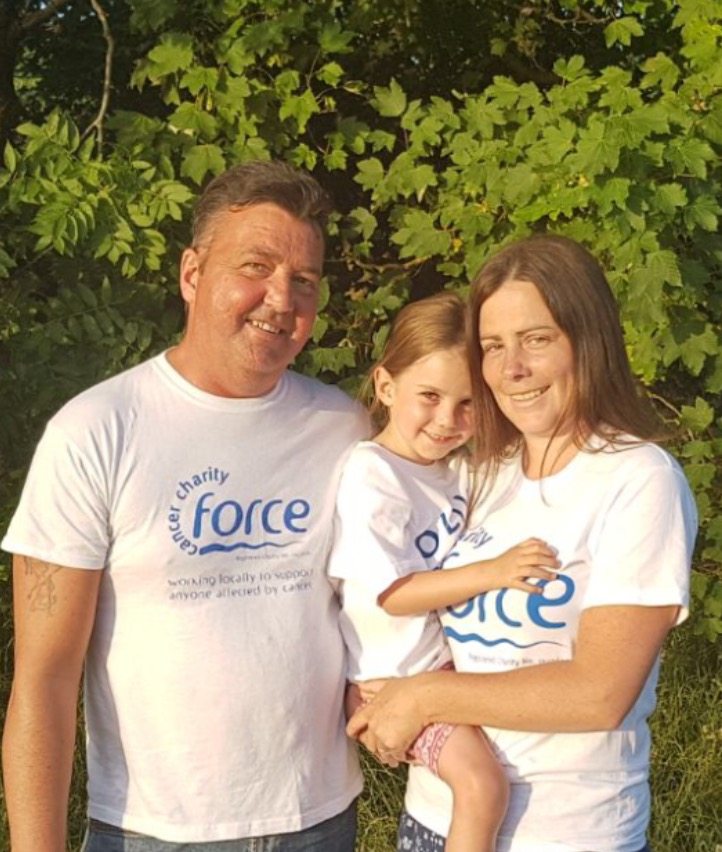 When she first signed up to run for FORCE, Helen wrote to explain her motivation.

“So I’ve decided to do the Great West run this year. At my current level of fitness I reckon I could just about manage to run to the end of my road before collapsing. And crying.

“I’m rubbish at anything mildly athletic. My exercise generally consists of walking over The Quay for a pint. I can’t even tell you the last time I broke into a mild sweat, probably when I was in labour to be honest.

“It’s going to be painful and I actually have no personal desire to ache, perspire and experience chafing in places I’d rather not.

“I’m hoping to raise some money for FORCE Cancer Charity.

“My partner and daddy to our lovely little girl was diagnosed with terminal brain cancer last year. I can honestly say this has been the most difficult, painful, heart wrenching, devastating year we have ever had.

“Watching someone you love go through the pain Jay faces every day is horrendous and it’s made worse by the fact that although he’s being bought more time, the doctors say he is not going to get better.

“The pain, heartache and sadness lives with us each day but we try our best to stay positive and get on with our lives the best we can.

“This has been made much easier for us with the tremendous support we have had from FORCE Cancer Charity. I can honestly say I don’t know where we would be without them.

“I knew very little about the work they do before Jay was diagnosed. You never think anything like this is going to happen to your family, it always happens to someone else. I just knew it was a charity that supports people with cancer. However, it does so much more than that.

“On a personal level FORCE has provided invaluable support for my family during a very difficult time.

“The centre in the grounds of the RD&E is a little haven in the heart of Exeter where we can just sit and have a cup of tea and if Olivia is with us, consume as many Oreos as she can possibly eat.

“She loves the centre, she enjoys playing with the toys, colouring in and giggling with the lovely volunteers rather than sat in the hospital corridors whilst her daddy had daily radiotherapy sessions.

“After these gruelling sessions it’s somewhere Jay would come to have a few moments after the intense, uncomfortable treatment, sit in the garden with a cuppa and listen to the birds.

“For me it’s somewhere I’ve cried, laughed and been offered such an amazing level of support by wonderful staff who have made us feel like we are not alone.

“The centre offers a wide range of information, help and advice. They offer practical, psychological and emotional support including counselling sessions, support for children when someone close to them has been given a cancer diagnosis, money advice, massages, physiotherapy and so on.

“The support is open not just for cancer sufferers but also for their families and friends.

“The charity funds local research and buys equipment to improve patient care so if you have been or are yet to be treated for cancer in Exeter it is very likely the equipment was bought by FORCE.

“More and more people visit the centre each year and FORCE has expanded into other areas in Devon so more people can access this crucial support.

“This charity receives no government funding and relies on donations, so as much as I really can’t see myself and all my wobbly bits (I put on over a stone whilst off work so believe me there’s plenty) running for a bus let alone out round Cowley and back, I want to do this so other people can continue to be offered this support in the future and benefit from all this charity has to offer.

“You might think you’ll never be affected by cancer, and hopefully you won’t. However the reality is that an increasing amount of people are.

“Whether it be yourself, your mum, dad, nan, grandad, aunt, uncle, brother, sister, son, daughter, best mate, neighbour, Dave who comes to the gym, Debbie who works in the local or in our case my previously fit and healthy 43-year-old partner and daddy to our little girl.

“We all know someone whose lives and family are affected by it. The FORCE cancer centre offers incredible support in what can be the most difficult time of our lives and they offer it all to the people of Exeter for FREE.

“This is why I want to do this run. If you can donate even £1, it will go towards keeping this local resource doing the amazing work that it does in our community.

“Please support this wonderful centre. It’s run by amazing staff and volunteers, provides great local support and you never know when you might need it.”

As part of her Great West Run fundraising efforts, Helen and Jay are holding a raffle with nearly 100 prizes donated by businesses all over Devon. 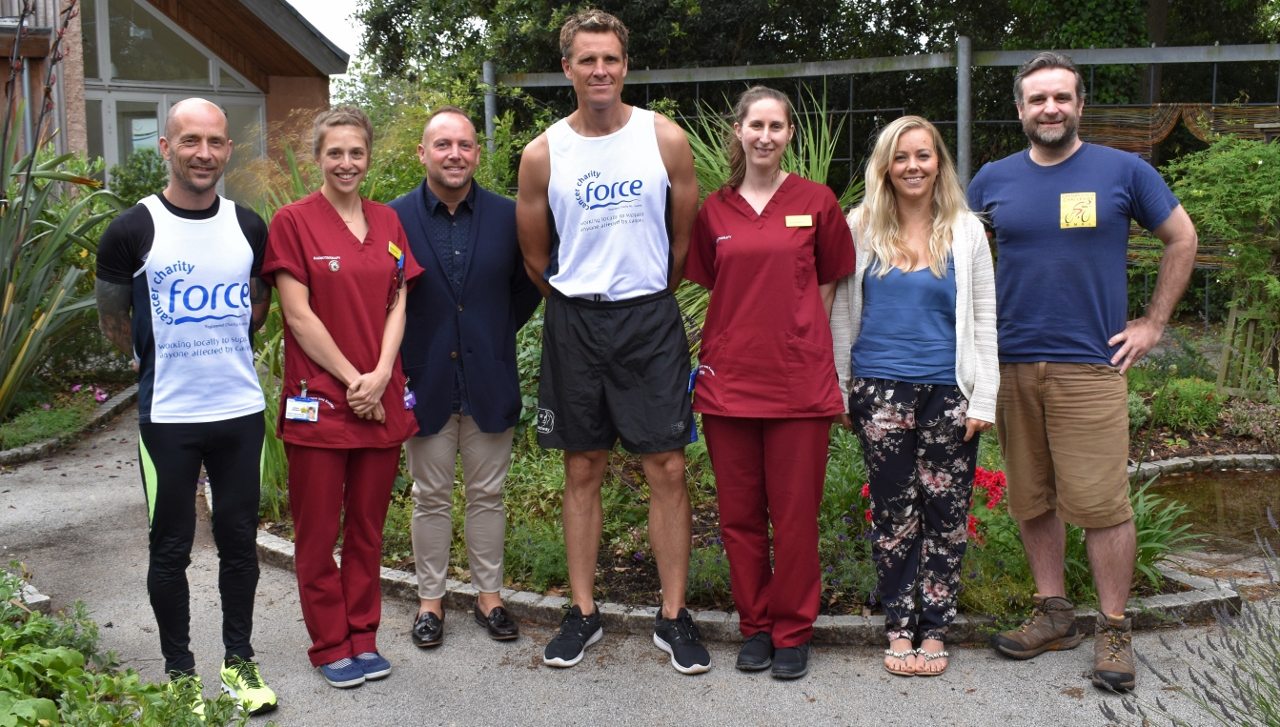